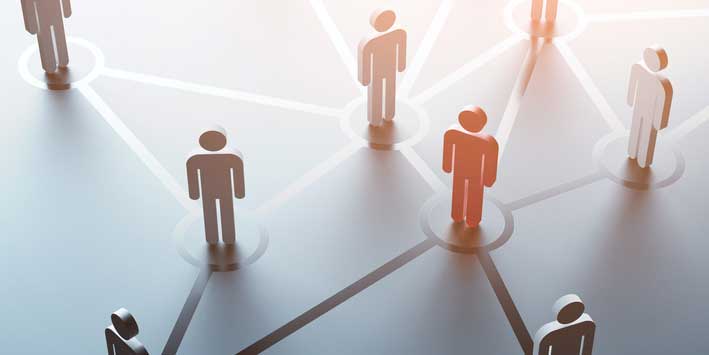 This brings us to the question, Who talks about who ? In this article, we propose to study and understand the relationships between individuals grouped by their occupations and gender. To do so, we establish a directed graph of relationships between speakers and people mentioned in the quotations from the Quotebank dataset. In particular, some of the questions that will be answered in this article are:

In this study we use the Quotebank dataset, a dataset of 178 million unique, speaker-attributed quotations that were extracted from 196 million English news articles crawled from over 377 thousand web domains between August 2008 and April 2020. We focus on the years 2015 to 2020.

Using SpaCy, we extract 100 000 quotations for each year, in which a speaker mentions another person, called the subject. After cleaning, we get the following amount of samples:

Some occupations are at the heart of the relationships…

We computed a directed graph representing the relationships between the different occupations. A node N corresponds to a single occupation (e.g. ‘politician’, ‘actor’). Its size indicates the amount of unique people (either speaker, subject or both) whose occupations include N. It is common for the people included in the data to have multiple occupations.

Those distributions are heavily skewed, far from the usual real-world network. This means two things:

The Interest of occupations for one another

This graph is interactive - Zoom in and try to select and displace nodes to feel the weights of its edges, indicating the interest in the associated occupation

Network indicating the "has mentioned" relationship between all occupations that include at least 60 people. The weight of edges indicate the interest of the source occupation in the destination occupation. For a node N, an edge E is displayed only if its weight reaches the 95%-percentile of the weights of all edges coming out of N.

The graph is highly connected and has numerous occupations which are not distributed in the same way with some being more present than others, such as politicians compared to sport cyclists.

What about relationships ? There are a lot of them where in particular, some occupations seem to be at the heart of attention such as politicians, writers, singers or actors. Besides some relationships are common sense, as for example, we can see that sports managers and coaches are mostly addressing to sportives. Furthermore, some relationships are very inclusive, that is to say, that people with the same occupation are more likely to refer to each other, which is notably the case for football players.

Politicians and singers ! What a surprise ! This list can be interpreted as the occupations that the population talks the most about overall. But how about the average interest ? If we take a single occupation A, how much do the other occupations care about A on average ?

Well well well ! No politicians, singers or actors anymore. We now obtain some very specific occupations. But then one question arises, how much do people care about the ‘most famous’ occupations on average ?

It appears that the average interests of the occupations in politicians, singers and actors are a little under 4%.
What can we conclude ?
Let’s say you have a random occupation. On average, you will mention a politician 4% of the time you mention someone. Nevertheless, there is most likely another rather specific occupation linked to yours, which you will talk about a lot more often (perhaps train driver or speed skater).

However pretty much everyone talks about politicians, while you might be the only one to mention skate drivers. Thus (and as expected !) the politicians get more attention if you consider the whole social environment as a whole.

… and often very gendered ones.

Now what does the data tell us about the visibility of men, women and other genders in the media in general according to their occupation?

Below is a directed graph represening the interactions between speakers and subjects but this time the graph is generated with the occupation and gender of each person as a comparison key. Nodes and edges in blue and red concern respectively males and females.

Interest network based on occupation and gender

Nodes including less than 60 people, were not displayed. Other genders than 'male' and 'female' were all included in the process but were not displayed due to the lack of enough individuals of those genders in the dataset. While those formed very clear clusters, the lack of data prevented any conclusion.

Compared to the graph with the occupation as a comparison key, 2 clusters are clearly visible : the “female cluster” and the “male cluster”. Both are very connected within themselves, very far apart from each other and highlight several differences between males and females.

At first we can see that the female and male clusters have very different sizes. If we take a closer look on the data we can see that, indeed, women are very underrepresented in this dataset.

Indeed women are the origin of less than 20 % of the quotes that are reported in the media and are 5 times less likely than men to be spoken about in the media.

We now have a closer look at the graph and want to know what are the occupations of the women represented in the media compared to men.

Most of the women present in the media are artists. There are also a few politicians. We notice that although on repartition quite a lot of women which said quotes are involved in politics (throughout the years always more than 17%) or are researchers, business persons, most of the women names found in quotes are artists. And women politicians are way more represented as speakers than as subjects.

Now what about men’s occupations?

Most of the men present in the media are politicians, artists and sports players. They are much more represented than females in the different occupations and especially in science and sport as well as religion.

Finally, what about relationships between males and females ? The graph shows a real separation and gap in communication between them where it is mostly the people attached to the public domain who are closest to the men. The artistic field does not escape it, where women don’t communicate much with men, even in the same field. As a whole, relationships between individuals are very gendered according to the occupation that each one occupies. Is it really that men only talk about other men and women only talk about other women?

We have provided the following graph created with the 2015 dataset: